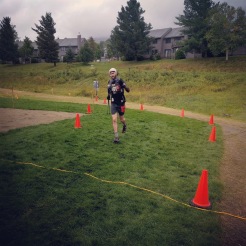 The past iterations of the Jay Peak Trail Festival consisted of a 25k loop with a 50k option. Learning from many of their past issues and mistakes, the Sub5 crew decided to host an 11 mile loop with 22 and 33 mile options. The weather outlook for this year’s race couldn’t have been more dichotomous: sun and 70s for the 5k’s on Saturday; 50s and rain for the Sunday 11 mile loops. My friend Abe had driven up from Syracuse, and we warmed up under a slate grey sky and that spat and hissed. The 11 mile loop would take us through the lower nordic trails, up the imposing Ulhr’s Dream, across the top of Jay Peak, ascending and descending sections of the Long Trail, rambling up and down various slopes, and weaving back to Ulhr’s Dream and the start via rolling nordic trails bottomed out with ankle-deep puddles and slick with the continuous, soaking rain.

I learned a few important things this year:

I had not decided whether to run this until the morning of the race, which was the morning after Jay Peak. My legs felt…eh. I wasn’t sure how they would hold up for a fast 5k, but I’ve run this race the previous two years and wanted to see how I’d do.

Tired legs were an understatement as the leader jumped off the starting line and I never saw him again. I was able to maintain a decent pace but was easily passed by another runner half way through. As we came to mile 2.5 I was just behind the third place runner and beginning to run on fumes when I decided to see if I could hang on for another half mile—the course takes a quick “S” turn and I was on the inside, so if I could hold the inside I could keep him wide and force him to yield. Surprisingly it worked; I held out and for third for the second year. While I like to say that I don’t love running roads, let alone running 5ks, I do love running this local race on my home turf. It is fun to see familiar faces, and catch a glimpse of some pretty fast kids as well.

Oh, right, so why did I name this post “supercalifragilisticexpialidocious”? That was the song that was in my head the entire 11 miles up and round Jay Peak. This was thanks to Hattie’s recent obsession with Marry Poppins—which I don’t mind, but 11 miles of Julie Andrews in my head was almost as exhausting as the running itself.

Taking an Extra Moment in Nature

We rounded the bend and came to a sudden halt. The tractor inched down the intersecting trail, breaking the rhythm of our run and the calmness we had found. I grew impatient and frustrated as the tractor plodded and sputtered. I stopped my watch; the metaphorical foot tapping in my head in grew louder.

Katie and I had been out on an easy run at our local trail system on the Brewster River in Jeffersonville, VT. A rolling combination of single and double track, these trails were a refuge for us, a moment away from parenting and life’s concerns. But here life and technology and waiting were thrust at us. But then, just as suddenly, I realized what I was frustrated at. I had to stop, sure, but the tractor was hauling dirt and rocks to help improve the trails I was running on. More importantly, this momentary interruption was giving me a few extra quiet moments in the forest, a few more moments with the adult I love most in this world (cause love for your kid is on a completely different plain).

Why the hell am I frustrated at this?

Too often we grumble and complain about a momentary interruption that is really a chance for quiet, for surprise, for engagement, for taking a breath. The next time you find yourself faced with an interruption take a breath and ask yourself “Why am I frustrated at this?” I’ll bet that